Ethernet cables can come in two forms when it comes to wiring: 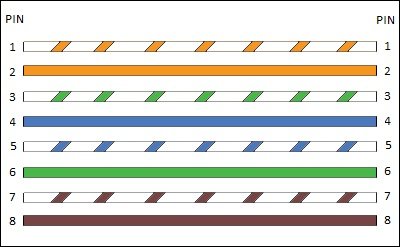 This type of cable is used to connect the following devices:

This type of cable is used when you need to connect two devices that use same wires to send and receive data. For example, consider connecting two computers together. If you use straight-through cable, with identical wiring in both ends, both computers will use wires 1 and 2 to send data. If computer A sends some packets to computer B, computer A will send that data using wires 1 and 2. That will cause a problem because computers expect packets to be received on wires 3 and 6, and your network will not work properly. This is why you need to use a crossover cable for such connections.

NOTE
Newer devices support the Auto MDI-X capability to automatically detect and configure the required cable connection type. This removes the need for a specific cable type between certain devices. Also, note that the Gigabit Ethernet and faster standards use all four wire pairs to transfer data in both direction simultaneously.