Skip to content
NOTE
This topic is not included in the latest version of the CCNA exam (200-301). If you are studying for the exam feel free to skip this article.

Route summarization is a method of representing multiple networks with a single summary address. It is often use in large networks with many subnets because it reduces the number of routes that a router must maintain and minimizes the traffic used for routing updates. Two methods for summarizing routes exist: automatic summarization and manual summarization.

By default, EIGRP has the auto summary feature enabled. Because of this, routes are summarized to classful address at network boundaries in the routing updates.

To better understand the concept of auto-summarization, consider the following example.

On R1, we have configured the following network statement:

But, because of the auto-summary feature, R2 receives the route to the classful network 10.0.0.0/8:

The auto summary feature can cause problems with discontiguous networks. This is why this feature is usually turned off. This is done by using the no auto-summary command:

NOTE
After typing the no auto-summary command, the neighbor relationship will be re-established.

One of the advantages of EIGRP over some other routing protocols (like OSPF) is that manual summarization can be done on any router within a network. A single route can be used to represent multiple routes, which reduces the size of routing tables in a network.

Manual summarization is configured on a per-interface basis. The syntax of the command is:

An example will help you to understand the concept of manual summarization: 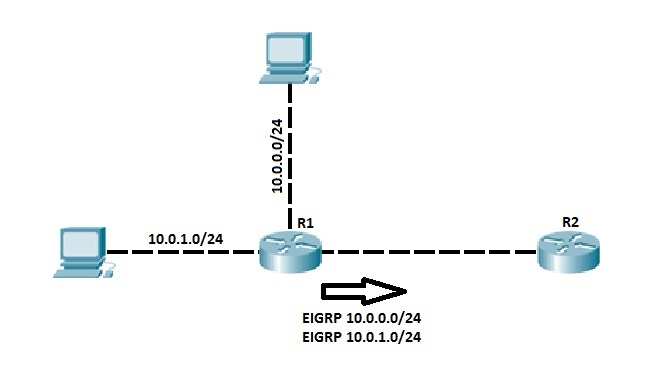 Router R1 and R2 are running EIGRP. Router R1 (on the left) has two directly connected subnets: 10.0.0.0/24 and 10.0.1.0/24. EIGRP advertises these subnets as two separate routes. R2 now has two routes for two subnets, which can be confirmed by using the show ip route command on R2:

We could configure R1 to advertise only one summary route for both subnets, which helps reduce R2’s routing table. To do this, the following command can be used:

Now, R1 is sending only one route to reach both subnets to R2. We can verify that by using the show ip route command on R2:

Now R2 has only one route to reach both subnets on R1.

NOTE
In the example above, the ip summary command included two subnets on R1, but also some other addresses that are not in these subnets. The range of the summarized addresses is 10.0.0.0 – 10.0.255.255, so R2 thinks that R1 has the routes for all addresses inside that range. That could cause some problems if these addresses exist somewhere else in the network.