You can use the question mark to display a list of commands available in the prompt you are in: 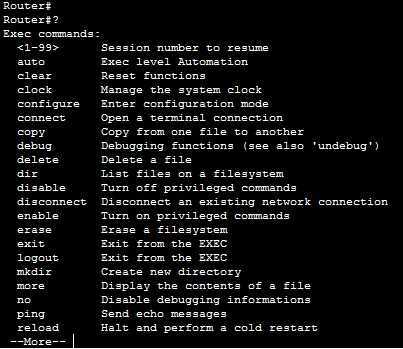 If the output spans more than one page, press the spacebar to display the following page of commands, or press Enter to go one command at a time. To quit the output, press q.

To display only commands that start with a particular character or a string of characters, type the letters and then press the question mark:

In the picture above you can see that we’ve displayed all commands that start with de.

If the command is more than one word long, you can use the question mark to display the next command in a string:

You can also autocomplete a command. Just type the first few characters and press Tab. If there is only a single match, IOS will complete the command.

You don’t have to type an entire word to finish a command. Just can type just the first letter or a couple of letters, and if there is only a single match, IOS will understand what are you trying to accomplish. For example, you can type sh ip int b instead of a longer version, show ip interface brief:

Note that we were able to execute the command above because each set of characters had only one match in the list of commands. If we’ve typed sh ip in b instead, IOS would not have understood our intention:

The % Ambiguous command: “show ip in b” message was displayed because the third keyword, in, has more than one meaning (inspect or interface).