An example will help you understand the concept.

Host A and host B are in different VLANs, VLAN 1 and VLAN 2. These ports need to be configured as access ports and assigned to their respective VLANs by using the following sequence of commands:

Because the link between SW1 and SW2 needs to carry traffic of multiple VLANs, it needs to be configured as a trunk interface. This is done by using the following commands on both SW1 and SW2:

Now the link between SW1 and SW2 can carry traffic from both the VLAN1 and VLAN2. You can verify that an interface is indeed a trunk interface by using the show interface Fa0/3 switchport command on SW1: 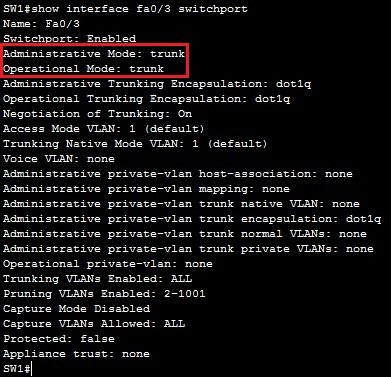 NOTE
VLAN 1 doesn’t have to be created, it exists by default. Also, by default, all ports are in the VLAN 1, so Fa0/1 doesn’t need the switchport access vlan 1 command.