OSI (Open Systems Interconnection) model was created by the International Organization for Standardization (ISO), an international standard-setting body. It was designed to be a reference model for describing the functions of a communication system. The OSI model provides a framework for creating and implementing networking standards and devices and describes how network applications on different computers can communicate through the network media.

The OSI model has seven layers, with each layer describing a different function of data traveling through a network. Here is the graphical representation of these layers:

The layers are usually numbered from the last one, meaning that the Physical layer is considered to be the first layer. It is useful to remember these layers, since there will certainly be a couple of questions on the CCNA exam regarding them. Most people learn the mnemonic „Please Do Not Throw Sausage Pizza Away“:

So, what is the purpose of these layers?
They are most commonly used by vendors. They enable them to implement some functionality into a networking device, which then enables easier interoperability with devices from other vendors.

Here is a brief description of each of the layers of the OSI model.

It is a common practice to reference a protocol by the layer number or layer name. For example, HTTPS is referred to as an application (or Layer 7) protocol. Network devices are also sometimes described according to the OSI layer on which they operate – e.g. a Layer 2 switch or a Layer 7 firewall.

The following table shows which protocols reside on which layer of the OSI model:

The TCP/IP model was created in the 1970s by the Defense Advance Research Project Agency (DARPA) as an open, vendor-neutral, public networking model. Just like the OSI model, it describes general guidelines for designing and implementing computer protocols. It consists of four layers: Network Access, Internet, Transport, and Application:

The following picture show the comparison between the TCP/IP model and OSI model: 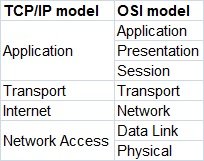 Differences between OSI and TCP/IP model

There are some other differences between these two models, besides the obvious difference in the number of layers. OSI model prescribes the steps needed to transfer data over a network and it is very specific in it, defining which protocol is used at each layer and how. The TCP/IP model is not that specific. It can be said that the OSI model prescribes and TCP/IP model describes.