The following example describes the way in which standard access lists can be used. 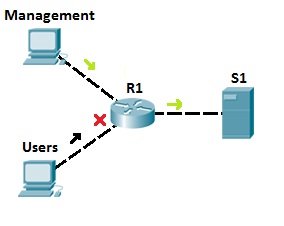 Let’s say that server S1 holds some important documents that need to be available only to company’s management. We could configure an access list on R1 to enable access to S1 only to users from the management network. All other traffic going to S1 will be blocked. This way, we can ensure that only authorized user can access sensitive files on S1.

To demonstrate the usefulness of extended ACLs, we will use the following example. 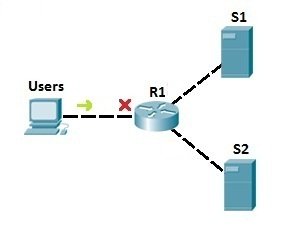 In the example network above, we have used the standard access list to prevent all users to access server S1. But, with that configuration, we have also disable access to S2! To be more specific, we can use extended access lists. Let’s say that we need to prevent users from accessing server S1. We could place an extended access list on R1 to prevent users only from accessing S1 (we would use an access list to filter the traffic according to the destination IP address). That way, no other traffic is forbidden, and users can still access the other server, S2: 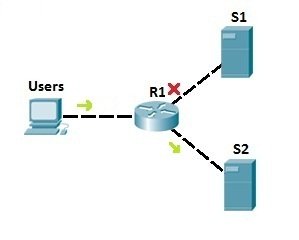